Humour. Not guaranteed to be funny

A Parliamentary candidate who could lose out on £22,000 in taxpayer cash if she is not elected to a Trafford seat next month says it could leave her unable to pay her mortgage.

A leaked letter revealed MP Angela Smith, who is standing as the Lib Dem candidate in Altrincham and Sale West, has appealed for a change in government rules.

She could lose out on the cash if she’s unsuccessful at the General Election on December 12. She says she is ‘fighting for fairness in how MPs are treated’.

Ms Smith, who ‘hates injustice’, described her ‘horror’ at the thought of missing out on the money.

She previously served as MP for Sheffield Hillsborough, from 2005 to 2010.

Ms Smith is currently MP for Penistone and Stocksbridge, having been elected to the seat in 2010.

She quit the Labour Party in February alongside six other MPs. They formed The Independent Group, later renamed Change UK.

Government rules state that if an MP loses their seat, they are paid two month’s salary in a ‘loss of office’ payment.

The cash gives former MPs time to find alternative employment and adjust to life outside Parliament.

But, because Ms Smith is standing in a different constituency to the one she currently servces, she would not be entitled to the money if she is not elected in Altrincham and Sale West.

Unlike in the US, over here there is an established church, headed by the Queen, with established gospel readings for each Sunday in the liturgical year.

The appointed reading for today is a parable.

Jesus said, “In a certain city there was a judge who neither feared God nor had respect for the people. In that city there was a widow who kept coming to him and saying, `Grant me justice against my opponent.’ For a while he refused; but later he said to himself, `Though I have no fear of God and no respect for anyone, yet because this widow keeps bothering me, I will grant her justice, so that she may not wear me out by continually coming.”

In other words, the ‘elite’, ‘enlightened’ judge, who was very wise in his own eyes and prudent in his own sight, thought that if he kept delaying the unimportant old widow’s case, she’d give up – he’d wear her out – but in the end, he was the one who wore out. 🙂

A majority of our MPs have no respect for the people (and, it goes without saying, no fear of there being any power greater than the EU or any wisdom greater than their own). They think that if they can keep delaying, they’ll wear us out.

Extinction Rebellion aim to cause disruption. Obviously they will succeed, if not nearly as much as they’d like. Many Londoners may be made late for work. There will be some economic impact.

Brexitters would rather avoid disruption. Obviously we will not wholly succeed, though the effect may be not nearly as much as Project Fear would like. Many lorry drivers may be stuck in queues. There will be some economic impact.

Between now and the end of the year, which do readers expect to cause more?

Senior Government figures are considering a series of proposals to “sabotage” the EU’s structures if Brussels refuses to agree a new deal or let Mr Johnson deliver Brexit without one.

Two Cabinet ministers told this newspaper that they were among those backing a more “aggressive” approach towards Brussels.

It is understood that plans under discussion include blocking the EU’s 2021-27 budget, which is due to be agreed early next year, and nominating a British commissioner who would cause disruption within their portfolio.

Senior ministers discussed the prospect of sending Nigel Farage, the leader of the Brexit Party, to take up the role.

The dance of politics often looks silly, ungainly and downright improper. Compared with the antics in parliament this year, the Tory conference is mild stuff, but still …

Yesterday, I was told that the minimum wage would remain alive and well under the Tories. Today, I learn that the Tories will make 3 years in jail mean 2 years in jail instead of, as it previously had, 18 months in jail.

I’d rather 3 years meant 2 years than 18 months. As a major reform of bluLabour into a true Tory party, this strikes me as short-weight, but half-a-loaf is better than no bread. It does seem to offer scope for being outbid by the Brexit party in the law and order area with those likely to vote for either, but at least it’s a step in the right direction.

The kindest guess I can make at why tendresse is shown to the minimum wage is inspired by this paragraph in a Dominic Cumming’s Spectator article:

This was brought home to me very starkly one day. I was conducting focus groups of Conservative voters. I talked with them about immigration for 20 minutes (all focus groups now start with immigration and tend to revert to it within two minutes unless you stop them). We then moved onto the economy. After two minutes of listening I was puzzled and said – who did you vote for? Labour they all said. An admin error by the company meant that I had been talking to core Labour voters, not core Tory voters. On the subject of immigration, these working class / lower middle class people were practically indistinguishable from all the Tories and UKIP people I had been talking to.

What was it, I wonder, that caused Dominic to wonder who they voted for when these core Labour voters, who could so easily have been core Tory voters while the subject was the PC speech police or immigration or Brexit (or law and order), began talking about the economy? Could it have been the minimum wage? I fear it was.

Less than a year ago, I posted my astonishment that May’s Tory party seemed more attached to the deep state and the SW1 faction than to professing whatever it took to win the next election. I suppose it’s a step in the right direction if the Tories have now reverted to type 🙂 – but I see scope for further realignment yet. The internal and external purge of the Tory party is not over, I hope – thought it may for now be running in channels constrained by Dominic’s insight above.

Jacques Chirac, the former French president who championed the EU, but whose later years were blighted by corruption scandals, has died aged 86.

This sentence from today’s BBC red-button news seems an accurate summary – except that I am puzzled why the word ‘but’ connects the descriptions of the two main interests of Monsieur Chirac. Surely ‘and’ would have been the more appropriate conjunction.

I hereby propose a petition to Wizards of Westminster to ban the following cards from the Elite format, as games are getting stuck in endless stalemates. 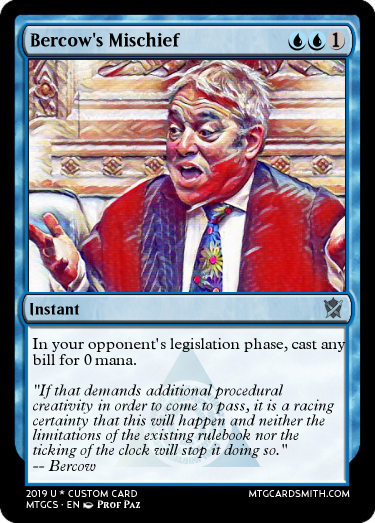 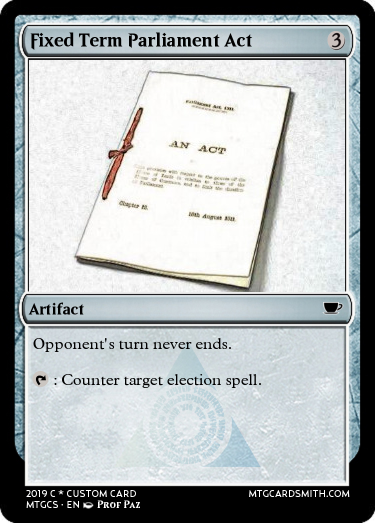 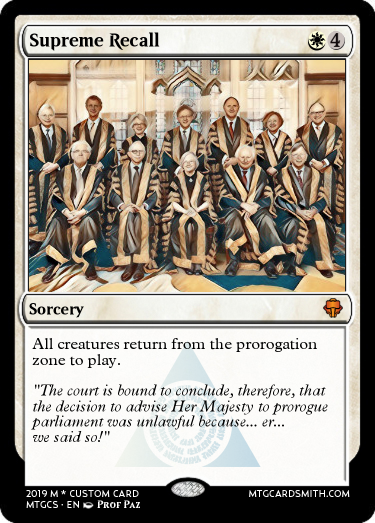 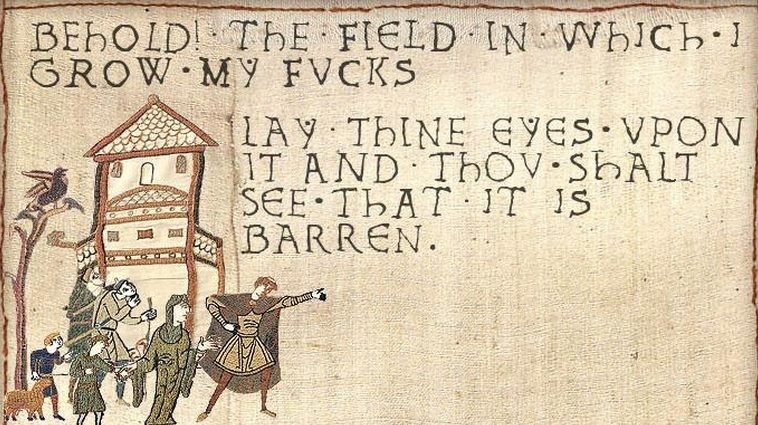